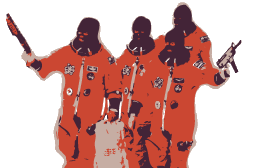 What is a Roleplaying Game? is a tiny, but complete roleplaying game designed for the uninitiated. It’s a quick game meant to give people an honest taste of the hobby minus the giant, intimidating rulebooks.

And it is free for you to use and distribute.*

Here it is in an illustrated PDF format that, when printed, should fit in your pocket, making it a game you can carry anywhere. Whip it out at a family reunion when your great aunt wants to know what those silly games you’re still playing are all about. Take it to a job interview so you can show your future employer what that “Other Interests” section of your resume is dominated with. If folded properly, it’ll even fit under the tongue, in case of capture or incarceration. Personally, I’m going to have it printed on the inside of a folded business card so I can hand it out to folks I meet who wonder what the hell it is I do.

* The Creative Common license on it says that you must attribute me when you do so and you are not allowed to sell the game, but let me tell you how you can ignore even these two little restrictions.

You cannot sell the game as is. Even if you completely redo the layout, graphic design and illustrations, you may not sell the game. You may distribute it for free, but you cannot make money off of it.

However, you may include the game as part of a larger work that you have for sale, including, but not limited to: anthologies, magazines, zines, CD-ROMs accompanying game books sold in DVD cases, in the introduction of your own roleplaying game, that sort of thing. In all these cases, you still must attribute the game to me, but you can make money off the larger work.

If you make a non-superficial change to the text—such as changing the initial situation to a bunch of friends stuck in traffic and one of them is about to give birth or change it so people are called out for doing Sneaky and Lazy things—including non-superficial changes to the answers to the question “what is a role-playing game”—such as saying it’s a game that requires dice or a GM—then you must change the attribution and may therefore distribute the game however you please, including selling it, since it is now something of your own creation.

Superficial changes, like calling the characters astrothieves instead of astrorobbers or having someone called out for doing something Difficult instead of Hard, do not qualify for this clause. You’re allowed to reword the game in this way to make it fit whatever format you choose to distribute it in. If you have a question about whether such a rewording qualifies as a non-superficial change, feel free to send me your text and I’ll let you know.

Now here’s the most important part. If you disagree with me about any of my answers to the question posed in the title, or if you have any sort of quibble with the game design itself, you must express this by making non-superficial changes to the game and text until it satisfies your concerns and then distribute that new game under your name. All other forms of criticism will, at best, be ignored.