Behold, games I’ve had a hand in, but Dig a Thousand Holes did not publish!

Dread was the first published game that I was involved in–I was the lead designer and writer. Dread is a horror game that has earned a certain amount of fame, or infamy, for its use of Jenga as a resolution mechanic. In 2006 it won the gold Special Judges’ ENnie Award for Innovation, an achievement I’m tremendously proud of.

It’s published through The Impossible Dream and you can purchase a copy there or through IPR or a PDF at DriveThruRPG.

You can also read my not-so-well maintained blog about the Dread.

In the summer of 2008, to celebrate Free RPG Day and that summer’s JiffyCon, my friends over at the Imagination Sweatshop and I decided to try to make a game, from conception to publication, in a week and then release it for free. The result was Trial & Terror: Supernatural Victims Unit, a game based on the Law & Order shtick but set in a world where the classic movie monsters existed among us as regular contributing members of society.

The whole process frenetic. But we did it and it was nominated for an ENnie in the Best Free Product category. 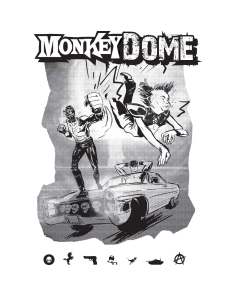 So we did it again a year later. This time, we ended up with MonkeyDome, a game about grim, post-apocalyptic slapstick.

MonkeyDome was a a bit of a paradigm shift for me. This little experiment completely changed the way I look at games, and I fully expect to toy around with it for quite some time.

You can see most of my musing on the topic over at the Imagination Sweatshop, were you’ll find other a number of different projects I have on my plate (or back burner).

Then there’s SpaceKnights, a two-page game of interstellar chivalry for 6 players created for a contest at NerdNYC. It’s also free. And made in a week. So enjoy at your own peril.